Treating Back Pain with coMra Therapy

Pain provides an immediate warning signal that there is a severe energy deficit in cells and tissue2. By nature of its action, coMra therapy is ideally positioned to address this fundamental deficit. coMra therapy enhances the efficiency of energy metabolism and thus accelerates the restoration of energy balance in affected cells and tissue. One of the primary effects is a relief from pain. Dr Peycho Zlatev (MD), a doctor from Bulgaria, suffered from an injury in 2000 which damaged the discs between L4 and L5, to the extent that he could hardly walk, and his left leg began to atrophy. It was recommended that he undergo surgery which offered a 50% chance of success and 50% risk of paralysis. He opted not to go for the surgery. Several years later he was offered Low-level Laser Treatment (LLLT) which provided some significant improvements in his condition. A short while after that, he was introduced to the Delta Laser.

“When I tried the Delta Laser a couple of years ago, I could not complete the first treatment because I fell asleep from the sudden pain relief. After just a few days I could sleep peacefully at nights, with no drugs and soon my walking started to improve. I realised that as far as efficiency and speed are concerned, this new laser had no comparison with the previous one I had been treated with. After a couple of months, I dropped using the stick and later even the numbness in my left foot, which had been a big problem while driving, greatly diminished.”

TREATING BACK PAIN WITH COMRA THERAPY This treatment (as found in the coMra User Guide) is the primary treatment that can be used to treat any back pain or injury, including neck pain. It can be applied 1 to 4 times daily and continued for as long as necessary. This is the treatment designed to assist with Myositis, or inflammation of the muscles. It should be applied twice daily for as long as necessary.
● Treat the affected muscles at intervals of 5cm: 1 minute per point @ Variable (V)
● Scan paravertebral zone to treat nerve source of the affected area: 5 minutes per side @ 1000Hz
● If the affected muscles are in the legs, scan both sides of the lumbosacral spine: 5 minutes per side @ 1000Hz

In situations of chronic pain and significant injury, the initial pain relief after coMra therapy may sometimes last only a few hours and then the pain returns. This should not be confused with the short-lasting effects of analgesic drugs. In these cases, coMra therapy treatments should be continued for weeks, months and in some cases even years, where there has been severe damage to the nervous system. The prolonged treatment allows the ultrastructural damage to cells to be repaired and restored enough for energy metabolism to become self-sufficient. 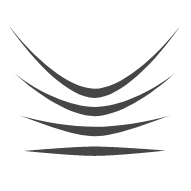